Were you looking for the Big Momma from Hungry Shark World?

Big Daddy dwarfs all sharks below the Megalodon. He has the 10th most health, with 250 (previously 325). However, Big Daddy's health drains very quickly.

Big Daddy's diet consists of Death Mines and even Mini Subs. Instead of running in front of Mini Subs, he can destroy them from anywhere in a single hit. He can also eat Mini Sub Torpedos, and is able to destroy Enemy Robo Shark,

Helicopters, and Biplanes in one hit, instead of 2 hits with previous sharks. Big Daddy has armour on some of his body, which allows him to deflect Mini Sub Torpedos on that area. Also breaks small cages in one hit.

His tongue can also stretch out to pull in large prey. During a Gold Rush, this colossal fish can achieve a score multiplier of x80.

You can buy Little Daddy, which gives your Big Daddy an extra 30% stamina, as well as substantially reduces the health drain speed, prolonging your survival time as well as its bonus, for 300 gems, the same cost of the Baby Megalodon. 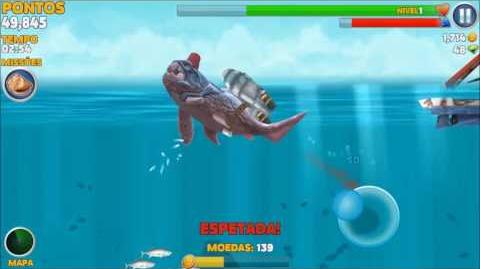 Big Daddy, reduced to half price during a Christmas sale. 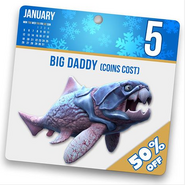 The Big Daddy has a broader diet in Hungry Shark Evolution than the precedent sharks, being able to eat almost anything except Toxic Barrels, Volcanic Jets, and sharks larger than him.

Big Daddy is based off of a mutant version the actual extinct fish Dunkleosteus. Dunkleosteus was not a shark but actually an armored fish. The game gave Big Daddy details the Dunkleosteus didn't have such as:

Retrieved from "https://hungry-shark.fandom.com/wiki/Big_Daddy_(Dunkleosteus)?oldid=72187"
Community content is available under CC-BY-SA unless otherwise noted.