The Blacktip Reef Shark is the first playable shark in Hungry Shark World. It is unlocked upon entering the game for the first time.

As suggested by its size group, the Blacktip Reef is the smallest and weakest shark in the game.

The following table shows how the Blacktip Reef Shark can be improved with upgrades. 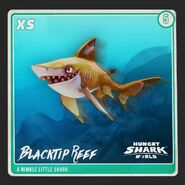 Retrieved from "https://hungry-shark.fandom.com/wiki/Blacktip_Reef_Shark?oldid=65627"
Community content is available under CC-BY-SA unless otherwise noted.