The Cloaking Device is an accessory introduced in update 3.7.0. of Hungry Shark Evolution. It gives the wearer the ability to become invisible to enemies and prey. The device is equipped on the shark's dorsal fin, so it cannot be equipped at the same time as a Gold Ring or Diamond Ring, but can be equipped with a Jetpack.

The cloaking device can be bought for 250 gems.

If the wearer does not eat anything for a short period of time(depending on the shark's food chain), it becomes invisible in which it cannot be seen by prey and predator alike. However, should its wearer bite down on unsuspecting prey while invisible, the shark will become visible again. 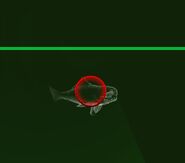 Add a photo to this gallery
Retrieved from "https://hungry-shark.fandom.com/wiki/Cloaking_Device?oldid=60107"
Community content is available under CC-BY-SA unless otherwise noted.