Evil Great White Sharks have a danger rating of Extreme, making their attacks deal massive amounts of damage (75), which is sufficient to instantly kill a fully grown Reef Shark. Even worse is that they are quite common, being a great threat for beginners.

Evil Great White Sharks seem to swim about randomly - there is no definite movement for them, similar to other evil sharks.

Evil Great White Sharks can be found in areas where the water is deep. They are pretty common and sometimes appear to the left of the map, above the Crab Lair; they are almost always found near the right/middle portion of the map. Many of them are found in the right-most area near the Kempy Cave, Near The Sunken Item of Jade Dragon it Also Spawn in 1. In the first version of the game, it has been found in the location of the Moon on the Stick, however it was replaced by an Enemy Megalodon, then later was replaced with an Enemy Big Daddy or an Enemy Mr. Snappy or an Enemy Alan, Destroyer of Worlds.

Flying Great White in the Museum 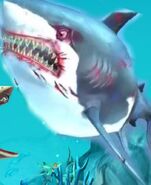 Retrieved from "https://hungry-shark.fandom.com/wiki/Evil_Great_White_Shark?oldid=67688"
Community content is available under CC-BY-SA unless otherwise noted.