Hungry Shark Evolution is the 5th installment of the Hungry Shark series released on the 18th of October, 2012, created by Future Games of London (FGOL). It introduces new sharks and creatures to the Hungry Shark Series as well as missions, objects and other content. It currently recieves regular updates (as of January, 2016)

Hungry Shark Evolution is among the few free games in the Hungry Shark series. It is succeeded by Hungry Shark World, but it still is being constantly updated by FGOL alongside its successor.

There are numerous playable sharks in the game. Each shark is assigned a mission set, which gives a variety of rewards when completed. Mission shells are scattered across the playing map, and must be discovered before any missions can be completed. Once the eight main missions are completed, a super mission for the shark will be unlocked (the super mission doesn't have a shell). Other items exist in the game, such as equip-able accessories like immobilising gear and assistant sharks that swim by the side of your main shark. Sunken treasures can be found throughout the map and rewards the player with a small amount of coins when a round is completed or when the playable shark dies.

Apart from the playing mode, there are other menus. There is the Evolve menu that lets you check up on your sharks and track their growth, items and statistics (strength of bite, boosting speed, and the capacity of boost). You can purchase new sharks in the Evolve menu, and learn about all sharks in the game. Another menu is the Accessory Shop. Here, you can purchase accessories, learn about accessories, maps, and baby sharks and equip, toggle or unequip accessories for play. The Accessory Shop can only be accessed via selecting one shark first. You can also initiate gameplay sessions in the Accessory Shop.

All game sessions begin with the chosen shark falling from an unknown location in the sky, into the water. The general aim of the game session is to survive for as long as possible, whilst earning as many points as possible. This is accomplished by locating, battling and consuming the extremely vast variety of creatures all over the map. eats stuff with its mouth and any thing near its mouth near them; this results in an automatic attack by your shark.

The game will give you a variety of interesting Accolades as you achieve, eat, and take damage from things.

Consuming many creatures in a short amount of time increases the multipliers. There are two mulitpliers: the uniform multiplier for all sharks, which multiplies points earned by 2, 4, 6 or 8x. Sharks also have their own multipliers. Generally the more powerful the shark, the higher the multiplier will be. These multipliers help accomplish one of the two main game play goals, which is to achieve the highest score possible.

Apart from surviving as long as possible and earning the highest score, there are several side objectives. Every shark has its own set of missions, specific objectives that can be completed when their shells are discovered - there are many shells scattered all over the game map. There are also sunken objects, which are various items that are hidden all over the game area. Finding these objects rewards generous coin bonuses. Finally, there are mini games. Usually, there is a beach ball that can be tossed about with the nose of your shark, with the aim being hitting the ball upwards five times in a row, without the ball touching the ground or water. Sometimes, the beach ball is replaced with other balls during special real-world events. For example, the beach ball became a soccer ball for a time, to celebrate the FIFA World Cup.

Movement in game sessions can be controlled by either a virtual D-Pad, or by calibrating the game to respond to the tilting of your device.

The Reef Shark, the first playable shark in the game. 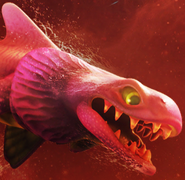 Alan, Destroyer of Worlds (Alien), currently the most powerful "shark" in the game.

The Museum entry of the Giant Crab.

Points are the score measurement system used in Hungry Shark Evolution. 500000 points earned in a game will result in unlocking the Top Secret Lab.

Missions are optional objectives that can be completed for entertainment and rewards.

An excerpt from the museum.
Add a photo to this gallery

Hungry Shark Evolution includes two currencies: coins, the "standard" currency, and gems, the "premium" currency. Both coins and gems can be used to acquire new sharks and purchase decorations and accessories.

Retrieved from "https://hungry-shark.fandom.com/wiki/Hungry_Shark_Evolution?oldid=53586"
Community content is available under CC-BY-SA unless otherwise noted.