Get 100% growth with Megalodon

The Killer Whale is the third !! Tier character in Hungry Shark World.

The character appears to be based on the Orcinus orca. The Killer Whale can do tricks and breathes air (as orcas are mammals, not fish).

Like any other !! shark, it can equip up to 3 pets at a time and can break purple crystal walls. During gold rush, its points multiplier is 8X.

It is reddish with white patterns unlike its enemy counterparts.

Pros: Can go on land without taking beaching damage

Can jump high and can go fast on land.

Cons: Bad stats and is not worth the price.

Since it breathes air, the Killer Whale gains less damage outside water. The Killer Whale can do tricks such as flips in the air and can jump high making it very effective for traveling on land.

The Killer Whale can eat anything except for red jellyfish, king jellyfish, proximity mines, mega mines, and ultra mines. 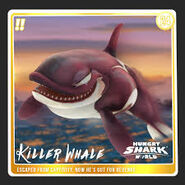 Sing with Alan, Destroyer of Worlds
Add a photo to this gallery

Retrieved from "https://hungry-shark.fandom.com/wiki/Killer_Whale_(HSW)?oldid=64269"
Community content is available under CC-BY-SA unless otherwise noted.