Getting Moby Dick to Max Level

Leo (Liopleurodon) is a "shark" in Hungry Shark Evolution. When fully grown he is 18 m which is the same length as Alan, Destroyer of Worlds. He is able to break parts of the map that have blue cracks on them and dark blue icebergs in the arctic dimension. He can be unlocked for coins once you grow Moby Dick to max level.

Leo can be bought for 500,000 coins or 900 gems. For a year, he was the strongest shark, until he was replaced by Nessie (Plesiosaur).

This is a common argument going on, about which game has the better Pliosaur: World (Drago) vs Evo (Leo). Hungry Shark posted it on their Facebook[1] and Twitter [2] pages, making the already raging argument even more popular. Here are the traits of each shark, so you can decide for yourself:

Some mission can be hard without The Flea, cause of Leo's massive health drain at later stages other can require some luck. But most are pretty easy with late game equipment and some skill.

InspirationLeo is based of the Liopleurodon. 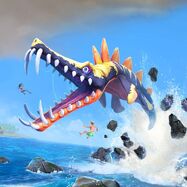 Leo in the Shark Selection

Leo swagged out with Baby Pryo

Easter with Drago (Pliosaur)
Add a photo to this gallery

Retrieved from "https://hungry-shark.fandom.com/wiki/Leo_(Liopleurodon)?oldid=67749"
Community content is available under CC-BY-SA unless otherwise noted.