Were you looking for the Megalodon from Hungry Shark World?

This shark is extremely powerful; it can eat almost all creatures and even basic mines and Boats. When fully leveled up, it is also extremely agile, being able to quickly ski across the lands and seamlessly wipe beaches clean of human life.

However, this monstrous creature has a few flaws. Its giant body makes it difficult for the shark to travel across tunnels, and also renders an easy target for various other smaller aggressive creatures such as Seals, Sharks and Divers. Although it can devour huge amounts of meat at a very quick pace, its health drains equally fast.

There are 10 creatures that are stronger than the Megalodon; the Dunkleosteus, Mr. Snappy, Giant Crabs, Alan, Destroyer of Worlds, Moby Dick, Leo (Liopleurodon), and Nessie (Plesiosaur). The current strongest is Sharkjira (Kaiju Shark).

The Megalodon is the fifth most powerful playable creature after the Big Daddy, Mr. Snappy, Alan, Destroyer of Worlds, and Moby Dick, being able to eat everything except Toxic Barrels, Death Mines, and Mini Sub's torpedoes. Megalodon's extremely high Bite stat allows it to eat many creatures in under a second. Sometimes, Megalodon eats so quickly that it doesn't even close its mouth; it just leaves it open and lets food fly into it. Megalodon shares the fourth highest maximum health with the Great White Shark, though both are beat by the Big Daddy, Mr. Snappy, and Alan, Destroyer of Worlds and Moby dick. When a jet-pack is equipped, this makes it possible for all sharks to fly continuously if the boost is used in bursts. Combined with its amazing speed stat, Megalodon is able to reach the bottom of the ocean in seconds. It can also leap extremely high into the air, letting it eat Paragliders with ease.

The Megalodon is great for earning gems, as it can jump high in the air, eating paragliders, helicopters and harpoon boat men with ease (which sometimes yield gems). Megalodon can also bite fishing boats and shark finning boats in half, which also sometimes yields gems as well.

One of its weak points is it can get stuck easily, and it cannot eat Mini Sub's torpedoes

Megalodon can move on land easily, but its health will deplete rather quickly.

Side profile of the megalodon 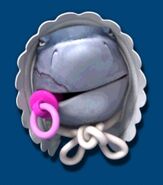 Big Daddy's promotional image, that compares him to the much smaller Megalodon

One of Megalodon's promotional images

Megalodon with the Crab Fork, courtesy of DeathDaddy54.

Another promotional image for the megalodon, showing it eating a entire small fishing boat.

Megalodon in the Arctic Map

"I am Getting Jumping Into the Water"