None, it's a robot

The Robo Shark is the third Top-Secret Lab Sharks to be unlocked in Hungry Shark Evolution. It is a blue and white robotic shark with jet engines for fins. It needs 50,000 points to trigger gold rush.

The Robo Shark is a super powerful shark that can blast into the sky with a jet-pack fashioned ability.

It can also eat mines and then fire them from its robotic jaws.

It also devours the Mini Sub's torpedoes, if they go through its mouth.

If said mines hit a distant target, it will allow the Robo Shark to receive an amount of health points.

However, it is still unable to eat Mega Mines and Ultra Mines. However when a Robo Shark's mines have collided to any of these mines, it increases the explosion radius of the mines it fired, allowing the Robo Shark to gain more kills and points, this is quite practically useful for a Gold Rush.

The Robo Shark can keep a maximum of three mines to fire stored in its body. After eating one mine, the Robo Shark will be able to shoot 11, and one of the round red lights on the side of the shark's body will become green. When all three of the round red lights are green, that means you have stored 33 mines. Because of these missiles, it is the only shark that can "eat" all enemy sharks without entering a Gold Rush or using babies/accessories other than the best "shark" as of June 2020: Kraken.

His jetpack ability and boosting underwater is significantly more controllable and faster than the normal jetpack and other sharks.

He does not need to boost to kill mini subs or damage Giant Crabs or Seal Moms. He just has to shoot a mine or just move forward to damage the Giant Crab.

The Robo Shark also has a health bar the size of the Megalodon and the Great White Shark. This allows it to withstand high damage and have a long survival time. This is a great choice for defeating the giant crab. On the flip-side, its consumption rate is low, probably because of the small bite area, and it is unable to boost underwater.

Even though the Megalodon has higher stats and a larger bite size, the Robo Shark is still comparable to due to the fact it can do anything the Megalodon can, and it can kill enemy sharks that are much stronger. The Robo Shark also has a much lower health drain, and its smaller size allows it to remain unstuck when passing through narrow passages. The cost of Robo Shark is 180,000 coins compared to the 50,000 coins for Megalodon and 150,000 coins for the Big Daddy. Its main weakness, however, is the fact that to gain all this power, it must constantly consume Mines to keep firing missiles. Because of this, most players prefer the Megalodon.

It should be noted that because of the high flying speed and small bite radius that it will often overshoot the target.

Note: This list only includes what the Robo Shark can actually eat. This does not include the available prey with a Gold Rush or with its missiles.

It has the same diet as the Megalodon, except Mega Mines.

The robo shark in the top secret lab

Cost of the robo shark 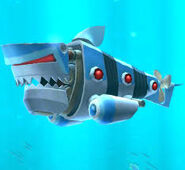 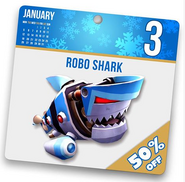 Retrieved from "https://hungry-shark.fandom.com/wiki/Robo_Shark_(HSE)?oldid=66337"
Community content is available under CC-BY-SA unless otherwise noted.