Seal Pups are enemies in Hungry Shark Evolution. They are grey seals with plump bodies. They previously resembled Harp Seal pups. As of the 2017 Shark Week update, they resemble common seals, probably based on Hawaiian Monk Seal pups.

Seal Pups have a danger rating of High, meaning their attacks are powerful and inflict great damage. They will attach on your Shark doing a little damage per bite. It is hard to eat compared to regular prey because when facing the player's shark the shark cannot eat it. It will bite about 5-10 times then release. So it is better to eat the Seal Pup from behind. Attacking from behind may also not work. If your shark swims completely out of range the Seal Pup can still bite until it has finished its 5-10 bites. If the shark your using is Natasha, the Seal Pup might impale itself on her tusk if she is facing their way.

Seal Pups are typically found in medium deep water. They can also be found in Christmas Wonderland and the regular Arctic World. They also appear in Shawaii.

Brown Seal Pups are Seal pups found in Shawaii. they are not hostile and will not attack your Shark, and they also extend your time in Shawaii when eaten. 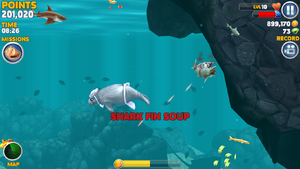 Seal Moms are a stronger variant of the Seal Pups, dealing considerable damage if they detect a Shark. They take damage if the Shark headbutts the seal's head, taking several hits to defeat. The Seal Mum also takes damage from mines shot by the Robo Shark, which instantly destroy it.

Retrieved from "https://hungry-shark.fandom.com/wiki/Seal_Pup?oldid=69021"
Community content is available under CC-BY-SA unless otherwise noted.