The Shark Man is a harmless enemy found in Hungry Shark Evolution. It was unknown if a Shark Man was a human-shark hybrid or a human dressed in a shark costume, but it's been confirmed as the latter because, during events in which you have to eat humans, Shark Men count as humans. When eaten, it will give 4,000 points and scream the Wilhelm scream sound effect.

It was introduced to Hungry Shark Evolution in July 1, 2014. The shark costume resembles a Great White Shark. Sometimes the Shark Man may yield one gem, and with sharks below the Tiger Shark it is quite hard to catch, as the Shark Man is a very fast swimmer. When you see him, the screen zooms out.

They only appear in certain areas of the map. Although they mostly appear alone, there can be two and there doesn't seem to be a limit on how many can appear in one run. Sharkmen also reappear quickly back to original place if not eaten. Shark Men run and swim at high speed if frightened.

Shark Men can get away even when you have the Megalodon or Big Daddy sharks if humans get in the way. They sometimes yield a gem. 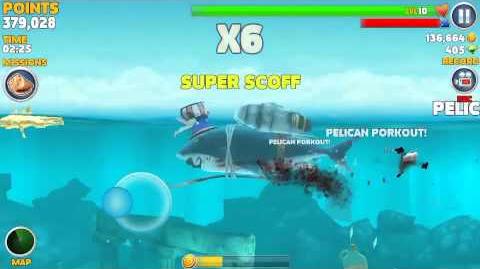 Retrieved from "https://hungry-shark.fandom.com/wiki/Shark_Man?oldid=64166"
Community content is available under CC-BY-SA unless otherwise noted.